The “A.T.,” as it's called by hikers, is much more than just a path through the woods. It is a national scenic trail, part of the same national park system that includes Yellowstone, Yosemite, and the Great Smoky Mountains. In Pennsylvania, the Appalachian Trail follows the ridges of mountains east of the Alleghenies to the Susquehanna River in a long section of Trail notorious for its foot-bruising, boot-destroying rocks. The Trail north of the Susquehanna is characterized by long, flat, rocky ridges broken by fairly strenuous climbs in and out of gaps. About ten miles south of the Susquehanna River, the Trail crosses the Great Valley of the Appalachians to the Blue Ridge. This southern portion of the Trail through Pennsylvania has many sections that are gentle, and grades are easy, making it one of the easiest sections of the Trail. Overall, there are 229.6trail miles in the state, with elevations ranging from 320 to 2,080 feet. The trail runs along the southern border of Eldred Township.​

About the Township
Eldred Township is a Township of the Second Class located in Monroe County. Local government services are provided to an area of 24.5 square miles and as of the 2010 census, a population of 2,910. There are 34 miles of Township roads and 20.7 miles of state roads in Eldred. Sources of funding include monies received from taxes.

Hunting — with the proper state licenses — is PERMITTED along approximately1,250 miles of the Appalachian Trail through national forest lands, national recreation areas, and on state forests and game lands. Although a concerted effort is made to identify land types on official Trail maps, it is seldom easy while on the footpath in several states to determine which jurisdiction you are walking through, except at boundary signs. Both hikers and hunters are advised to “know before you go.”

Hunting is PROHIBITED along approximately 900 miles of the Trail through national parks (like Shenandoah and the Great Smoky Mountains), most state parks, and on lands acquired by the National Park Service (NPS) exclusively for the Appalachian Trail and still under NPS administration—indicated on the outside edges by Trail corridor boundary signs. Hikers should be aware that the protected corridor is often narrow, averaging about 1,000 feet wide.
Even in areas where hunting is prohibited, hunters on adjacent lands may not know that they are near the Trail. Hunters may inadvertently cross onto Trail lands or unknowingly fire toward the Trail.

Hunting has been a traditional use of the land along many sections of the Trail,both on public and adjacent private lands. Hunting and fishing groups are amongthe biggest supporters of the protection of public lands. Because of this sharedusage, both hikers and hunters have a responsibility to take precautions tominimize conflict, and to cooperate with and educate each other regarding thisvaluable natural resource. By doing so, we can all continue to enjoy ourtraditions and adventures for generations to come.

In 2006 the Township acquired 54 acres from Jacqueline Mock, in memory of her father-in law Walter W. Mock, PhD (1893-1955) who purchased the property in 1935. The site primarily contains an existing farm field with adjacent woodlands. Most of the park will remain preserved as open space, for simple walking trails. The park is located in the central portion of the township between Church Road and Fiddletown Road. A portion of the property contains a natural riparian corridor along Princess Run. The Princess Run supports natural reproduction of wild trout, and as such is highly regarded by local anglers. 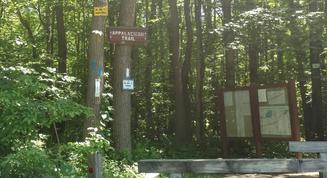 The Frantz Schoolhouse located on Church Rd. is being lovingly restoredby owners Tony and Renee Giordano. Built in 1855 and served EldredTownship until 1945. The Schoolhouse is an excellent representation ofthe popular one-room schoolhouses of its day. Visit the link
here for more information.

Take a Tour of Eldred Township